We know that Marco was working hard in Luxembourg where he was singing at the Grand Ducal Golf Club. 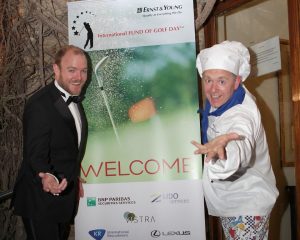 Why? Because he was joined by our amazing tenor singing waiter and wine expert “Bruce”. Bruce was there to present the wine selection but it became obvious that the “Celebrity Speaker” had already sampled many of the vintages on offer! His lecture began credibly but everyone was thrilled to discover that the very tipsy expert was really a top opera singer.

The singing waiter and singing chef in disguise earned several standing ovations and soon had the gathered golfers, bankers and chief executives dancing on the tables (literally). The event “Fund of Golf Day” sponsored by Ernst & Young, Lexus, PNB Paribas, Vistra, KRM recruitment and MDO Services was organized by Crossmedia 360  and it was celebrating its 10th anniversary in 2012. Photo courtesy of Jérôme Mura +(33)0615441881.

We are not so sure if Singing Chef Marco was working quite so hard in Abu Dhabi. 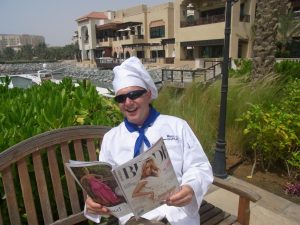 The office was told he was to be serenading conference clients at the Abu Dhabi Shangri-La Hotel but, as the photo evidence suggests he found time to catch some rays in the 50 degree heat. Who can blame him after an eight hour flight and no singing waiters to keep him company? At least he was reading up on the Emirates wedding scene. Marco flew with Etihad Airlines and stayed at the Traders Hotel, Abu Dhabi.

Please check spam and add us to safe senders if you don’t get a reply.

We use cookies to ensure that we give you the best experience on our website. If you continue to use this site we will assume that you are happy with it.Ok