Two and a Half Tenors 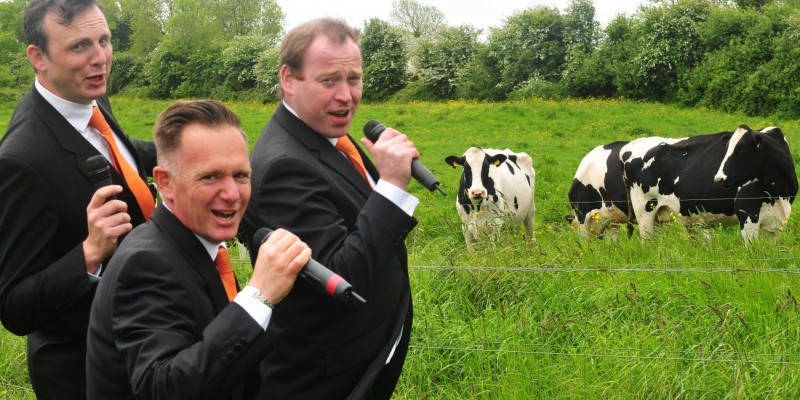 Local farmers in Pallasgreen, Co Limerick are hoping for a boost to both milk and meat quality over to coming months, thanks to an initiative by the opera group “Two and a Half Tenors”.

Classical music is often played to the much lauded Kobe beef cattle in Japan, which supply the most expensive steak in the world.  Italian Valdostana cows’ milk is renowned for its significant contribution to the production of the best gelato, largely because of their enjoyment of opera while grazing.

Now Irish farmers will get the opportunity to judge the effect of classical music on their Freisian and Angus cattle as the tenors plan a free open air concert in a farmyard beside the historic Sarsfield’s Rock in Pallasgreen.

The timing of the event could not be better as local producers are looking at various opportunities to boost output, while maintaining quality following the recent removal of milk production quotas in Ireland. The aptly named “Farmyard Proms” opera concert might prove to be a most harmonious solution.

IFA representatives have welcomed the singers and local breeders are enthusiastic about the project. Farmer Tom Breen has sung Irish Ballads to his herd for many years and has always found that the animals are calmer and produce creamier milk. He is convinced that high brow opera songs and calming classical melodies will further reduce stress and encourage a superior product. “A contented cow is likely to produce more milk and anything that enhances that can only be a good thing.”

Music promoter Riah Hogan of Singersforhire.com, who are supplying the singers for the event, believes that the farm’s Freisian cows will prove a most receptive and appreciative audience but hopes that locals will also come in “Herds” to the event on June 25th. She just hopes that the high Cs of guest artists Jean Wallace, Ryan Morgan, Derek Ryan & Nyle Wolfe won’t split the cream!

Please check spam and add us to safe senders if you don’t get a reply.

We use cookies to ensure that we give you the best experience on our website. OkRead more